10 May Acoustic Performance in Building Design

Urbanization is growing. More and more people are moving into densely populated centres to enjoy the benefits of city lifestyles: the proximity to shops, the ease of finding public transport, the nightlife. As a result, growing numbers of people are living closer to each other than ever before. And with increased population density comes increased levels of noise.

In addition to other implications, this means acoustics are becoming an increasingly important part of building design for architects and planners. The ability to enjoy one’s own space can be severely hampered when that space is constantly invaded by the noise of others.

A wide number of factors affect a building’s acoustic performance; this article will examine the window system’s role in noise control.

To understand acoustic management, one must first understand how sound is measured. Sound is not measured linearly, as the human ear is able to perceive a vast range of sound intensity: the quietest sound the ear can hear is more than one trillion times quieter than the largest sound it can fathom.

Instead, sound pressure is measured logarithmically on the decibel (dB) scale. Every 10 decibels, the perceived ‘loudness’ of the sound doubles. The below table, courtesy of the Australian Government, helps to illustrate this in practice: 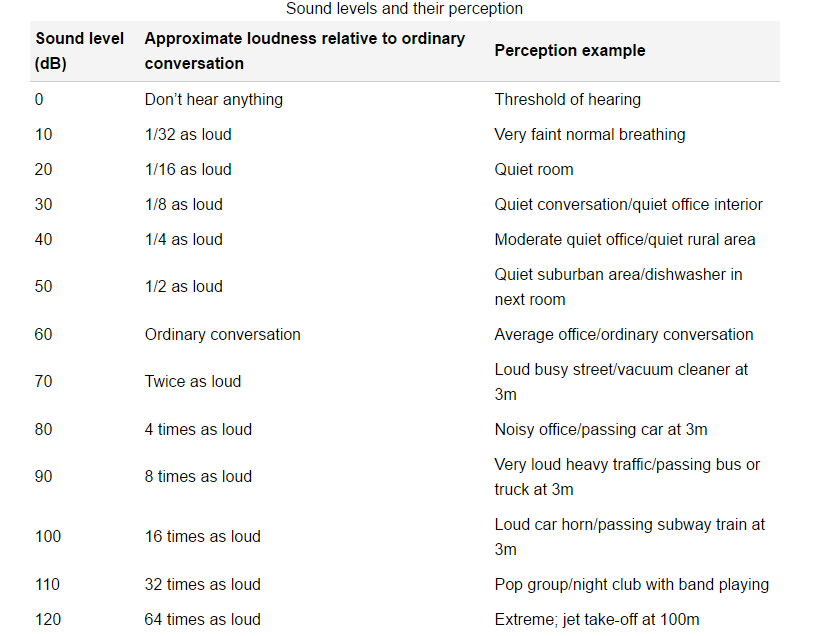 As can be seen, a small amount of numerical difference on the dB scale can make a big difference in perception, and thus in overall room comfort.

The Building Code of Australia set out recommendations for the amount of exterior noise that should be permitted to penetrate through to the different rooms in various residencies. For example, in an inner suburban house, the recommended ‘satisfactory’ level of exterior noise that should penetrate through to the bedroom is 30dB; for recreation areas it is 35 dB (for more information, see clause 3.8.6 of the Building Code of Australia, Vol. 2).

Sounds act differently on the same object at different frequencies. An object which attenuates a 1000Hz sound by 39dB may only attenuate a 100Hz sound by 18dB – less than half the amount.

As such, one of the ways acoustics are measured in relation to construction is the Weighted Sound Reduction Index (Rw). This averages acoustic performance across a broad spectrum of sound and provides a single number for the result. An increase in an Rw value of one translates to a reduction of approximately 1dB in noise levels – the higher the Rw, the better the insulation.

Whilst this is a useful guide for enabling acoustic design, one must pay attention to the frequencies of specific sounds one wishes to mitigate. This may be traffic in a building fronting onto a major road, conversation in busy pedestrian areas, or aircraft engines in regions under frequent flight paths.

The thickness of the glass has a simple and direct impact on the volume of sound: the thicker the glass, the greater the noise reduction for most frequencies. The below table shows the dB reduction of various thicknesses of the same clear glass on a range of sounds: 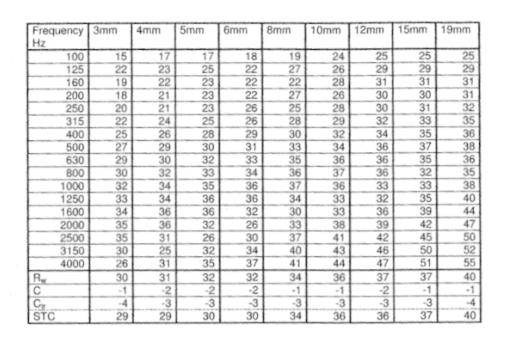 Similar to energy levels and thermal break, the introduction of an acoustic break in both the window and the frame can cause a considerable improvement in the Rw value of a window system.

In glass, this is typically a variation of laminate in the middle of the glass: these interlayers act to dampen the sound travelling through the material.

In aluminium framing systems, the polyamide or polyurethane strips used to break the thermal conductivity of the metal are highly effective in noise insulation; the acoustic conductivity of rubber is roughly 1/100th that of aluminium.

The size of the air space between each pane of glass in multi-glazed systems substantially influences the acoustic values. In short, the further apart two panes of glass, the better the overall noise insulation; however, some big fluctuations can occur in these numbers per sound frequency.

For example, at 100Hz, a double glazed system with two panes of 4mm glass and a 12mm airspace between them will perform considerably better acoustically than a single 4mm pane of glass; however, at 500Hz the single glass pane will reduce the volume of sound more effectively. In this case, the small gap between the panes of glass can work to amplify the wave of sound.

Overall, when assessing acoustic performance one must keep all goals in mind, as a number of factors can be influenced to reach a desired acoustic level. Whether it makes more sense to have thicker glass, multi-glazed options, thermally-broken materials or a combination of all above will depend on the project in question. However, the earlier acoustic performance is thought about, the easier the desired value will be to reach.